A family serving families for over four generations 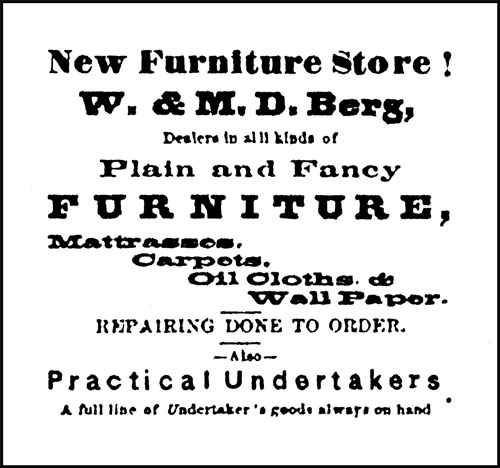 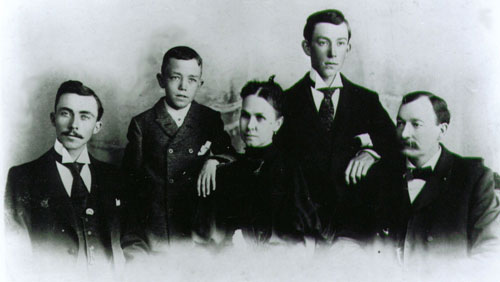 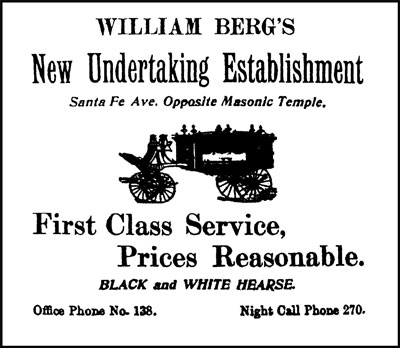 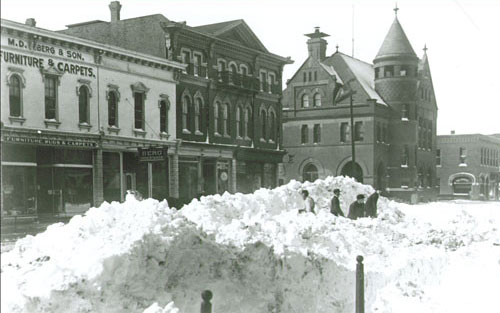 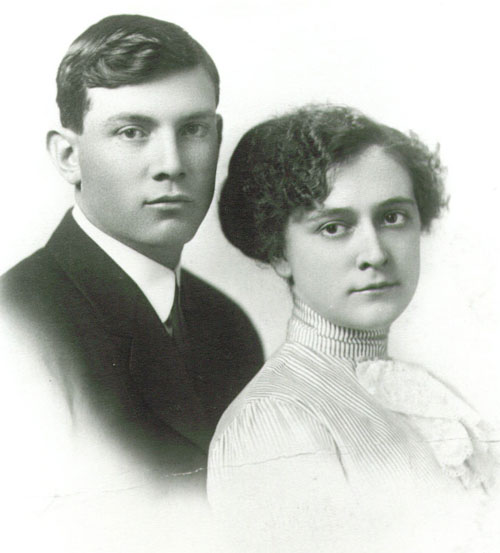 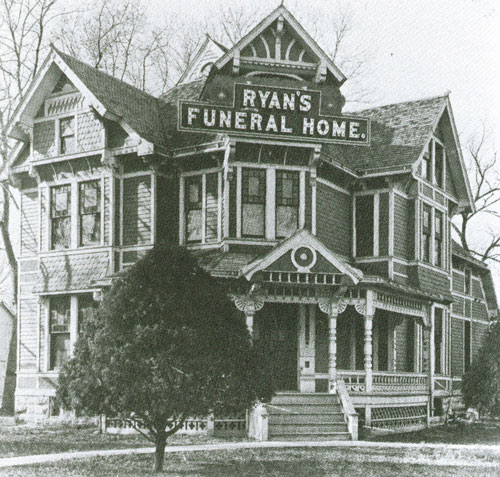 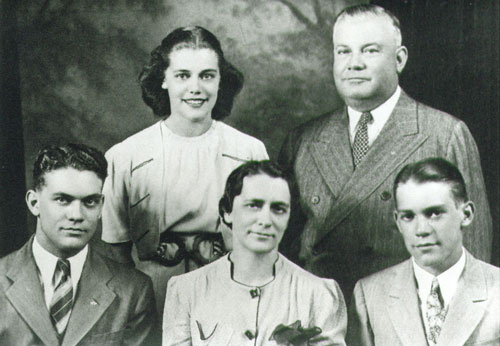 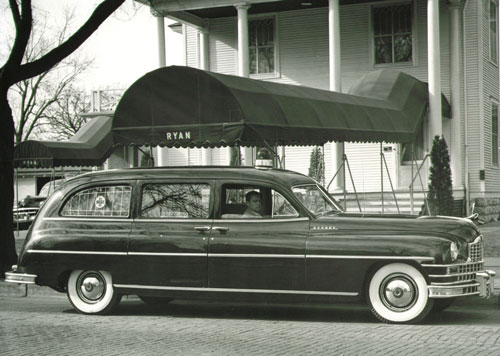 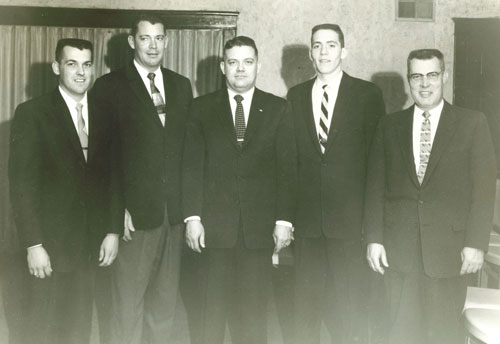 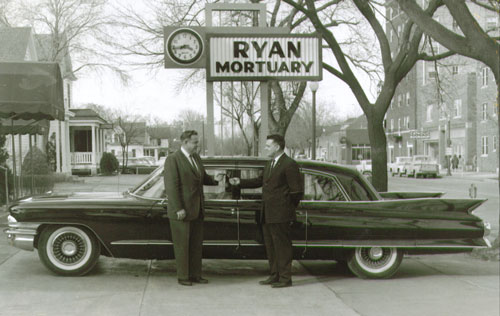 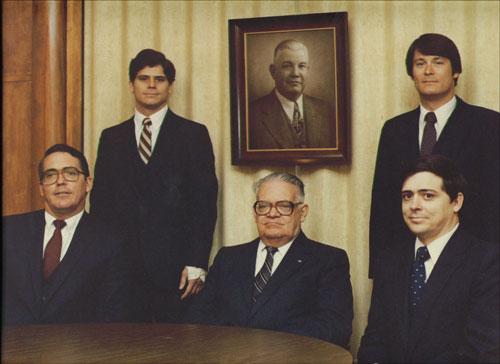 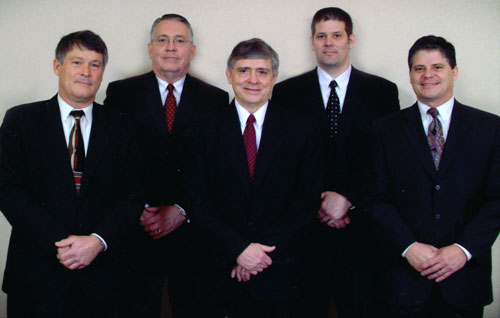 Mr. Ryan was born September 19, 1916, in Salina. He was the President and CEO of Ryan Mortuary, Salina and served as chairman of the board until his death. He was a life member of the St. John’s Lutheran Church, Salina, where he had served as church council president. An elected official for 32 years, he served as Saline County coroner for 16 years and on the Salina School Board for 16 years. He was a life member of the Masonic Lodge 60 and Salina Scottish Rite Consistory, 32nd Degree KCCH, The York Rite, Red Cross of Constantine, Isis Patrol and Oriental Band and past potentate of the Isis Shrine. He was a member of the Salina Rotary Club and the Salina Country Club. He was a WWII Army veteran and a life member of the Salina American Legion Post 62 and the 40 & 8; past exalted ruler, Salina Elks Lodge 718; and a member of the Saline Eagle Aerie, Salina Moose Lodge, United Commercial Travelers and the International Order of Odd Fellows. He was one of the oldest licensed funeral directors and licensed embalmers in Kansas, a past president of Kansas Funeral Directors Association and a member of the National Funeral Directors Association and Selected Independent Funeral Homes.

"On a warm March day in 1874, Mr. and Mrs. Berg and their four boys  settled in the town and established a firm under the name W. & M. D. Berg Undertakers". The business prospered and by 1900 in every addition of the local newspapers a glass-sided hearse, festooned with tassels and fringed with draperies, topped with five helmet-like crests and the top-hat driver holding in check two high-stepping black horses advertised "one of the finest funeral cars in the state. This firm was the forerunner of the Guy R. Ryan Sons Mortuary."

This brief account of the funeral profession is found in Ruby Phillips Bramwell's book City on the Move - The Story of Salina published in 1969. The Bergs, Peter and Mary, settled on a farm four miles south of Salina and two sons, William and Michael D., opened a furniture and undertaking parlor. The first advertisement in the Salina County Journal appeared on December 14, 1874. Other furniture men had advertised as being in the undertaking business prior to this time: Edward Lotz & Co (1869); Lotz & Hollard (1871); Radcliffe Bros. & Hall (1872) to be specific. However, the Bergs were the first to advertise as "Practical Undertakers", and continued in this profession while the others moved into other trades.

Five additional firms: F. & V. Eberhart (1880); Leander & Co. (1885); Killian & Williams (1881); New England Undertaking co. (1901) and P. Young Undertaker (1904) were in competition with the Berg Undertaking Co. for various periods of time, before they, too, moved on to some other community or business. In 1912, William Berg's son, Edwin L., moved to Berkeley, California, and started his own funeral home there. It should be noted that he also started a trade journal, Pacific Coast Undertaker. This was the forerunner of today's Mortuary Management magazine. The Berg Family was involved as publishers and editors of this magazine until a grandson, William sold out in November 1975.

The oldest son, Charles, remained in Salina with William and continued to operate the Berg Undertaking Co. However, upon his retirement, Charles W. Berg wrote a book entitled Confessions of an Undertaker, which was published in 1919. This book was based on his 25 year experience as an undertaker in Salina.

In 1909, Guy R. Ryan joined the Berg staff and began his family's involvement in funeral service. Ryan received his license from the State Board in 1912 and was manager and part owner of the Berg firm in 1917. In the fall of 1919, Guy Ryan opened a funeral home on the corner of Santa Fe and South. This residence was rented from members of the Berg family and met an unusual fate in March 1921. The Methodist Hospital Board purchased the building and it was converted into the first Asbury Hospital building in Salina.

This placed Guy Ryan in a difficult financial position as a suitable location to move the business to could not be found. Over the next three years, he was forced to work in varying degrees of partnerships with the other two funeral firms in Salina. In 1906, a Salina funeral director, Phillip Young, had built a home, which he intended to use as a funeral home. However, he was forced to sell in 1908, and this home remained a family residence until it became available to Guy Ryan in September 1924. With some old Berg equipment and records, the Guy Ryan Funeral Home was opened at 137 North Eighth Street.

With his wife, Flora, as the only permanent staff member, the next ten years were difficult to establish a strong business foundation in this location. Joseph J. Sullivan, a funeral director who first worked for Guy Ryan in 1919, became a partner in 1934 and the firm name was changed to Ryan-Sullivan Mortuary. Mr. Sullivan sold out in 1942 and only Ryan family members have participated in ownership since that time. Guy's oldest son, Kenneth R. Ryan, was licensed in 1937; his other son, Guy R. Ryan, Jr. was licensed in 1948. After Guy Ryan, Sr.'s death in December 1953, the firm used both Ryan Mortuary and G. R. Ryan Sons Mortuary to identify the partnership maintained by the two sons until 1969. Ryan Mortuary, Inc., a family corporation, was founded in November 1969, with Kenneth R. Ryan, President; Guy R. Ryan, Jr., Vice President, and Stephen C. Ryan, Secretary-Treasurer.

Through the years all the adjoining property surrounding 137 North Eighth was purchased. Eight major remodeling and/or construction projects were completed and the present mortuary facility covers over 8000 square feet.

Taken from Kansas Funeral Profession... Through the Years Since 1958 published 1983

We stand ready to assist you. If a death has occurred, please call us on the number below: